And then there was one…

Full-size pickup trucks usually carry the reputation as “indestructible”, mostly due to their stature.  Well, size doesn’t always mean that they are safe. The Insurance Institute for Highway Safety (IIHS) challenged this theory in a round of crash-tests. The IIHS put extended-cab and crew-cab versions of the Ford F-150, Chevrolet Silverado, Ram 1500, and Toyota Tundra through its full battery of tests. Of the seven vehicles tested, Ford was the only model to pass the small-overlap crash test earning the “good” rating that is required to obtain the Top Safety Pick award.

The crew-cab and extended-cab versions of the Ram 1500, as well as the crew-cab Toyota Tundra and Chevrolet Silverado, earned a “marginal” rating in the small-overlap test. Fairing slightly better were the extended-cab versions of the Tundra and the General Motors pickups gaining an “acceptable” rating. The IIHS reported that all of these models allowed for a substantial breach into the passenger area, particularly in the driver’s foot well.  “Drivers in these pickups would need help freeing their legs from the wreckage following a small-overlap crash,” said IIHS Vehicle Research Center vice president Raul Arbelaez in a statement.

The IIHS decided to test the two different body styles this year due to the significant structural counter measure discrepancies found between the crew and the extended-cab in the 2015 Ford F-150 last year.  In 2015, the crew-cab models received a “good” rating, while the extended-cab models received a “marginal”. Ford has since fitted additional structure to all versions of the F-150 to ensure a passing rating all around.  It only seems likely that the other companies will soon follow suit with similar structural changes to improve their performance on these IIHS tests. Watch the IIHS You Tube video here. 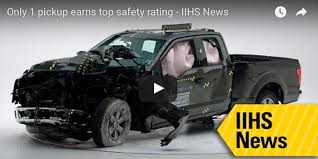 If you are looking to build the ultimate work truck, then Fleetwest offers innovative solutions. Our service bodies are a universal fit for most full size pickup trucks including Ford, Chevy, Dodge and Toyota. These service bodies are fully transferable from one truck bed to another, even fully loaded, thus eliminating any downtime required for vehicle maintenance or repair. Transfer on/off via crane, forklift or lifting jacks is made possible by a no-holes drilled installation. Fleetwest utility bodies can be customized for your trade, provide additional storage and offer more flexibility to improve technician efficiency. For more information, call a Fleetwest representative toll-free in the U.S. at (866) 497-7200.

Posted by www.Fleetwest.net at 7:37 AM